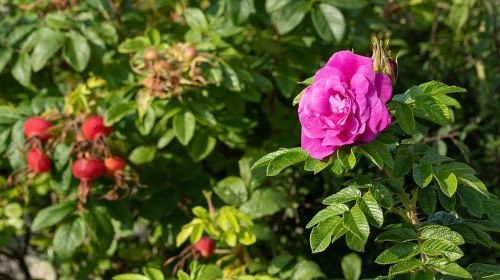 Rose Hip Rosa spp.
• Rose hips are the fruit of the rose plant, forming just underneath the flower and containing the rose
seeds. They form after the flower is pollinated and ripen in late summer through autumn.
• Depending on the variety of rose, rose hips range in size from very small to berry-sized and can
be orange to red when ripe.
• Common names of rose hips or rosehips include rose haw and rose hep.
• Rose hips are edible and culinary uses include tea, jams, jellies, soups and wine. They also have a
long history of medicinal uses and are known to have antiviral, antibacterial and antiinflammatory properties. The use of rose hips in the beauty industry continues today as well.
• Rose hips are eight times higher in vitamin C than oranges and are high in vitamins A, B, E and K
as well as lycopene and other nutrients.
• During World War II when citrus fruits were unable to be imported, Great Britain encouraged
people to collect rose hips as a source of vitamin C. The hips were used to make a syrup for
children.
• Rose hip oil has astringent qualities and is used in cosmetics and skin care products.
• Harvest rose hips after the first light frost for the sweetest flavor. The hips will be have good
color (orange to deep red) and be slightly soft. Harvest before they are very soft or wrinkled.
• To prepare rose hips for use by trim off the ends of the fruit, cut it in half and remove the hairy
seeds. The seeds should not be consumed because they can be irritating. In fact, dried rose seeds
have been used as an ingredient prankster’s itching powder!
• The fruits can be used fresh and can be dried or frozen, but note that the vitamin C content is
highest when the hips are fresh.
• Roses that are prized for their hips include: Rosa canina (the dog rose), R. rugosa (Japanese or
beach rose), R. chinensis (Chinese rose), and R. majalis (cinnamon rose). 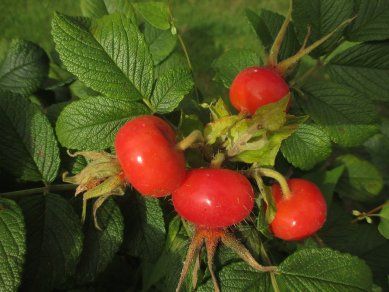 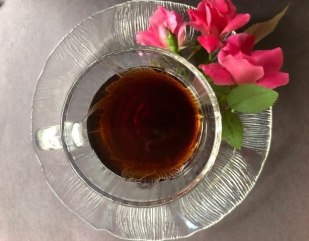 By Maryann Readal If you grow roses, plan now for rose hips. Simply leave the spent flowers on your rose bushes after their last bloom of the season. Do NOT cut them off. Allow the fruits of the ro…

Source: Rose Hips – Herb of the Month – The Herb Society of America Blog