You’d think a plant with a name as auspicious as this one would be dramatic and imposing. Instead, it camouflages itself on your lawn. But it has been used internally and externally since at least the 2nd century in both China and Europe. Its botanical name, Prunella, derives from the German word Brunella, which comes from dying Braune, meaning quinsy {a throat abscess}, for which it was commonly used in the Middle Ages.

Self-heal is a creeping perennial that volunteers in moist places like woods, pastures, sub-alpine meadows, and, of course, lawns. It sends up a flexible, branching, the flowering stalk that can reach 1 foot tall, with soft oval or lance-shaped leaves and beautiful pink to blue-violet flowers on spikes.
True to its name, this herb traditionally “heals all,” from simple eyestrain to whole-body inflammation.

Self-heal is used as a tea, in tinctures, and as an extract in capsules and tablet form. Make a strong infusion, and drink 1 to 3 cups a day. For the tincture, use 1 to 2 droppers full of warm water or tea two to four times daily. Follow the label instructions on other products.

Self-heal is a great example of a herb that is used both in traditional Chinese and Western cultures. In Europe, the herb has been used since the Middle Ages and is mentioned in 16th-century herbals as a wound-healing herb and a gargle for diseases of the mouth and tongue.
In China, self-heal has been used since at least the 14th-century as a cleansing herb that normalizes liver enzyme output and reduces fevers. In traditional Chinese medical thinking, each internal organ associated with a sense organ, and the liver is associated with the eyes. Thus, self-heal tea can be used as either a wash or a tea to help ease eyestrain, red and itchy eyes, sties, and other eye inflammation. The tea or extract can also help relieve dizziness and headaches when these symptoms are associated with a liver imbalance.
Self-heal is loaded with protective and antioxidant compounds known as phenolics, which act as antioxidants and have anti-inflammatory properties similar to the ones found in pomegranates and green tea. Since the taste is mild and refreshing, the herbal tea or extract can be used regularly as a healthy, calming drink for the liver, the skin, and the whole body.
A number of current studies show that self-heal can protect the blood vessels and has antiviral effects against influenza, herpes sores, and HIV-AIDS.

No concerns are known.

Seal-heal will want to be placed in partial shade; you can grow it in full sun, but it will need ample water. Give it fairly moist soil, and don’t fertilize it too much. Once the flower heads have turned brown, cut them back to the ground to encourage another bloom. Seal-heal is low and spreading and can die back during dry summers. It’s somewhat frost tolerant, and though it’s often a short-lived perennial, it reseeds and spreads easily by runners. Self-heal is a very pretty ground cover, weaving in and around other plants, and it also looks lovely cascading over the edge of a pot.
The seed sows best after cold stratification, or you can start it early in spring, before the last frost. Cuttings have a low success rate, but dividing the plant is nearly always successful.

Gather the flowering tops and any additional leaves below the flowering tops. In Western medicine, we consider the flowers to be potent as long as at least one-third of the head is blooming and no more than one-quarter is browning. In traditional Chinese medicine, however, the flowers are gathered when they are “wilting,” meaning already brown. Make sure this herb is dried at low heat since it degrades quickly. 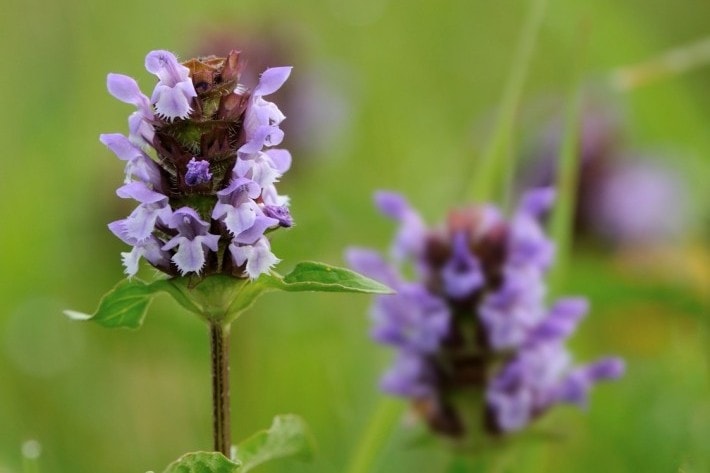 Our featured herb on HerbMentor.com during the months of March and April was Self-Heal (Prunella vulgaris). Each year we ask members what herbs they want to learn more about and self-heal was a top favorite. I have to admit that I wasn’t entirely enthused about self-heal. Sure, it’s a pretty little weed, but most modern-day herbalists overlook it as something that was once used but isn’t popular in modern times. So I started writing the featured herb article and went through lots of herbals that had vague information or none at all. Then I started looking at scientific studies and grew increasingly amazed. While the majority of western herbalists have forgotten self-heal, scientists haven’t! It’s been studied extensively for its ability to stop herpes outbreaks and even has promising studies against cancer. Historically it was widely praised for its ability to address upper respiratory infections and heal wounds. Log on toHerbMentor.com to read the full self-heal article. One of the studies that I found especially fascinating was an in vitro look at self-heal’s ability to protect skin cells from UV damage. The researchers concluded their findings with: “These results suggest that P. Vulgaris and RA [rosmarinic acid], used in skin care cosmetics, may offer protection against UVA-induced oxidative stress and may be beneficial as a supplement in photoprotective dermatological preparations.” 1 There is a growing interest in using herbs to protect the skin from damage and there have been several studies showing the potential of using certain plants externally to reduce photo-aging and the incidence of skin cancer due to sun exposure. 2, 3, 4 While I do my best to wear hats and cover-up in the sun, I have gotten my fair share of sun exposure when I was younger and more reckless (like the four months I lived in the Dominican Republic and spent all my spare time on the beach…yikes!). Inspired by self-heal, I created this silky soft oil serum that can be used to protect against sun damage, especially on the face. Before we get to the recipe, let’s take a look at the other ingredients.

The Oils and Rosemary Extract All of the oils in this recipe are highly prized for their ability to support healthy skin. While self-heal is the herb we are using for its protective effects, these oils are equally medicinal. These oils are expensive. If the cost is prohibitive for you, substitute all the oils with grapeseed oil or another light oil. Jojoba oil is light and silky, which is surprising considering that it is actually a liquid wax and not an oil. It comes from the seeds of Simmondsia chinensis, which is native to the southwestern U.S. Jojoba is high in many of the nutrients needed for healthy skin, including essential fatty acids. It is highly shelf-stable and rarely goes rancid. It mimics our own skin’s sebum and rarely causes an oily buildup or irritation. Argan oil comes from the fruit kernels of the Moroccan argan tree (Argania spinosa). It is a light oil that penetrates and hydrates the skin well. One study showed that argan oil applied topically helped to restore skin elasticity. 5 Pomegranate oil is heavier than the other oils in this recipe but is highly prized for its ability to easily absorb into the skin. It has also been shown to protect human skin cells from sun damage in an in vitro study. 6 Rosemary extract contains rosmarinic and carnosic acids, both extensively studied for their antioxidant abilities.7,8 It is often used in cosmetics to increase the shelf life of natural products. The Essential Oils I chose the essential oils in this recipe, not only for their amazing scents but also because of their strong affinity for the skin. All of these essential oils are used for healing the skin and have shown strong antioxidant activity in clinical practice and in vitro studies.9 Neroli and blue chamomile are expensive. If they are cost-prohibitive for you, consider using lavender essential oil only. This recipe also smells nice without essential oils, which would be a good approach for people with extremely sensitive skin.

Self-Heal Skin Serum Recipe This is a luxurious recipe that can potentially protect the skin from sun damage. It has a soft and silky feel to it, without leaving an oily feeling. Use it daily in the morning and night to protect your skin from sun damage. It can also be used to hydrate and rejuvenate your skin. What you’ll need… 5 ounces of jojoba oil 4 ounces of argan oil 1 ounce of pomegranate oil 15 grams of freshly dried self-heal herb 1 teaspoon of rosemary extract 20 drops of neroli essential oil 7 drops of lavender essential oil 3 drops of blue chamomile essential oil

Read More of this recipe here: 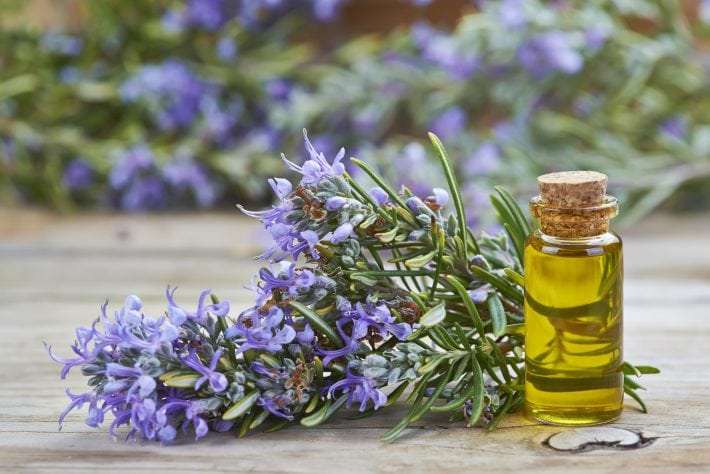 Self Heal Serum, made with Prunella vulgaris, protects your skin from sun damage. Self-heal serum can also be used to hydrate and rejuvenate your skin.

tagged with about, health, Herbal, Herbals, Learning Herbs, self heal