Posted on May 27, 2018 by Crooked Bear Creek Organic Herbs

Goldthread, also known as coptis or canker root, is a genus of perennial herbs that have been part of Asian and North American traditional medicine for hundreds of years. The roots of the plant look like a tangled mass of gold thread, hence its name. Herbal goldthread is actually the powdered rhizome, or underground stem, of the goldthread plant. 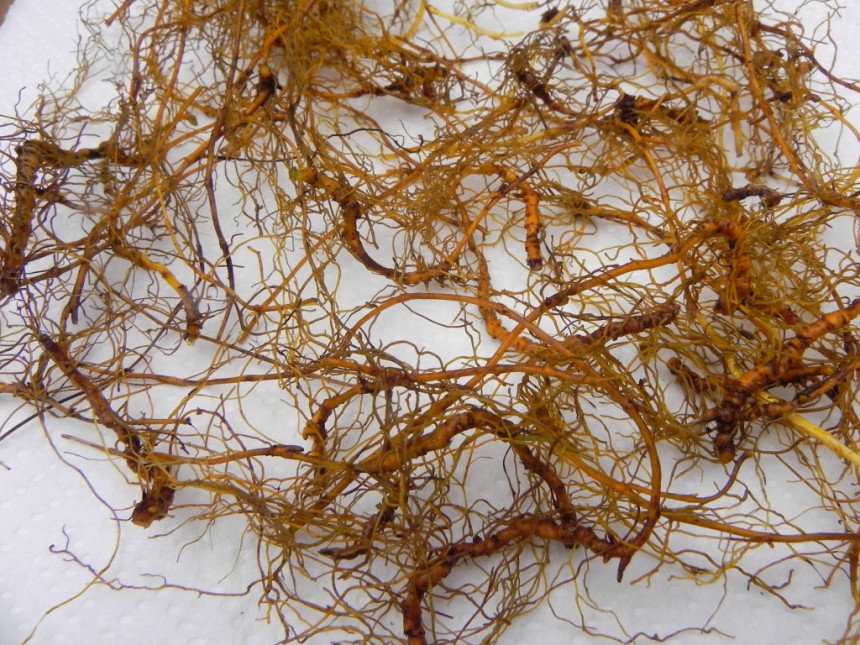 Goldthread is an important herb in both Ayurvedic and Chinese traditional medicine. Starting in the Tang dynasty, goldthread was used to make a medicine called Huang-Lian-Jie-Du Decoction (HLJDD), which is still used today. Herbalist relies on HLJDD to address a variety of ailments, including soothing irritation, promoting normal blood sugar, and supporting gastrointestinal health.

Native Americans used the herb as a digestive aid and to remedy infections and mouth sores. It’s from this that goldthread got the nickname “canker root.” The practical value of goldthread wasn’t limited to therapeutic applications; because of its bright gold color, Indigenous Americans also used goldthread to produce a yellow dye and to flavor beer.

The healing properties of goldthread aren’t simply folkloric in nature. Modern medicine has started to examine the potential health benefits of this herb. Animal testing confirms that goldthread can soothe redness, swelling, and irritation. Studies have found that goldthread can promote normal blood sugar and even support brain health.

Goldthread owes its healing abilities to high concentrations of several potent alkaloid compounds. Of these, berberine is most commonly associated with goldthread’s benefits. Berberine has dozens of therapeutic applications. It can protect against some types of harmful organisms and soothe irritated tissue. It promotes normal lipid profiles and is even known to boost the immune system. Multiple studies suggest that berberine may be of benefit for those suffering from obesity. Berberine promotes heart health, bone and joint health, brain health, digestive health, liver health, and is beneficial for the respiratory system. Perhaps most intriguing of all, berberine has been evaluated for activity against cancer but further research is necessary to fully understand its potential or draw conclusions.

Berberine isn’t goldthread’s only beneficial compound, though. Other alkaloids present in goldthread include palmatine, epi berberine, jatrorrhizine, columbamine, and coptisine. Coptisine, in particular, has received attention from researchers recently. It’s currently being examined for its ability to promote brain health. Among its other positive attributes, coptisine may help a fever, relieve discomfort, support heart health, and it’s a strong antioxidant. Additionally, it encourages normal cellular respiration.

Where to Find Goldthread

Many varieties of goldthread are native to Asia and North America and some are actually critically endangered. There are two reasons for this—one is genetic and one is man-made. The genetic cause is a random mutation that results in low pollen and seed production in certain species of goldthread. This mutation affects up to 80% of Coptis teeta, a type of goldthread from the eastern Himalayas. The second cause is overexploitation by humans. Goldthread is a victim of its own success. It’s desirable properties as a therapeutic herb has led to widespread overharvesting.

Finding a substitute for goldthread may be tricky. Goldenseal is a herb that also contains berberine. But, like goldthread, goldenseal has been severely over-harvested. You can find goldenseal in most drug stores, but the quality is dubious. Oregon grape root may be a better alternative than goldenseal. Although it has a lower berberine concentration, Oregon grape root is more sustainable and readily available. In fact, the plant is so common that it’s often considered an invasive species outside its native habitat.

While several varieties of goldthread are endangered and in need of protection, other species remain plentiful. Populations of some formerly threatened species, like the North American Coptis trifolia, are recovering. If you’re careful about your source, goldthread itself is still a good option. You can find goldthread in supplements, both by itself and blended with other herbs.