Posted on May 10, 2018 by Crooked Bear Creek Organic Herbs 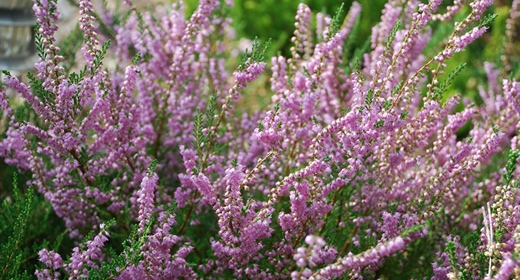 The familiar heather plant – Calluna vulgaris – belongs to the Ericaceae plant family. The plant is an evergreen shrub that has many branching stems and can reach one to two feet in length when fully grown. The heather is characterized by the possession of minute and needle-like leaves, each of which is about one-sixteenth to one-eighth of an inch in length. The leaves are borne in opposite pairs and are clumped together in four rows along the short green twigs on the branches of the plant. The heather bears purplish-pink flowers with occasional white colored flowers – from July through September; the characteristic flowers are almost bell-shaped. In morphology, the shrub is a tough, bushy, and woody evergreen perennial.

The purple heather flowers have a bell-shaped corolla that is two mm across, formed by the joining of four purple colored petals into a tube. The corolla is shorter than the four purple sepals, each of which is two to four mm in length. Heather flowers are borne on a narrow shaped and leafy raceme that can grow to nine cm in length; these racemes grow on the axils of the leaves lying on the upper shoots of the plant. The fruits of the heather are very tiny, rounded and hairy capsules with four cells inside each fruit. The minute seeds, each 0.7 mm in length have strongly meshed in the fruit. The shape of the leaves is oblong; each leaf can reach a maximum of 3.5 mm in length. Most leaves do not bear any hair; however, they can at times be downy, often lying in overlapping positions in four vertical rows along the twigs on the branches. Leaves have a dark green color when tender, but tend to turn brown as they mature. The stems of the heather are woody, wiry and pliable. Tender stems are initially covered with dense hair, these become hairless and smooth in later stages of growth and maturity.

One old Scottish verse states that there is “No’ a flow’r that man can gather. …can beat the bonnie, bloomin’ heather“, this is one of the many Scottish verses that praise the virtues of the heather. The Scots are familiar with the heather plants as this shrub grows and flourishes on many of the moors and heaths in Scotland; the heather has been traditionally used in many Scottish herbal medications. The heather is also a common sight in other temperate regions of the world including mainland Europe and the North American continent. Heather is used in Scotland for many ends; the wiry branched stems of the plant are employed for thatching roofs and are made into brooms. The boiled tops and flowers have also been traditionally made into a yellow dye used to color Scottish wools. A prized brownish honey is sourced from bees that feed on the flowers of the heather; this honey is an ingredient in Scotland’s famous Drambuie liqueur enjoyed by so many people. The white heather variety – botanical name: C. Vulgaris var. alba – is considered to be good luck charm in Scotland and the flowers of this variety are often tucked into bridal bouquets as a tradition in Scottish weddings.

The numerous beneficial properties inherent in the heathers were recounted by John Parkinson, the famed British herbalist who wrote the “Theatrum Botanicum,” that was published in the year 1640. John Parkinson states the many uses of the heather by ancient physicians in Europe, according to him, the heather served as an antidote “against the stings or biting of… venomous creatures.” He also states that the herb was used as a diuretic, which was drunk every morning and evening for thirty days, this he states “absolutely breake the [kidney] stone and drive it forth.” The herbal uses of the heather according to most modern herbalists are in the role of a sedative, a diuretic, and an anti-tussive – a compound that suppresses coughing, especially chronic coughs. 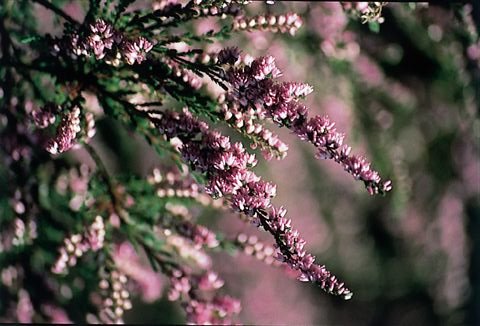 The remedy made from heather is an excellent diuretic and urinary antiseptic agent, helping in disinfecting the entire urinary tract and mildly boosting the production of urine. The remedy plays a role in the treatment of cystitis and alleviates inflammatory bladder conditions in individuals with infection in the urinary system. The remedy made from the heather herb has also been employed in the treatment of kidney and bladder stones – the herb helps in the destruction and elimination of stones in these organs. One of the main uses of the heather is in the role of a cleansing and detoxifying remedy; it is very helpful in treating problems such as rheumatism, in treating arthritis, as well as in treating gout and related metabolic problems. A herbal liniment is made from the macerated flowering tips; this can be rubbed on affected joints to alleviate the pain of arthritic conditions. The traditional remedy for chilblains is a hot poultice made from the flowering tips of heather.

Some of the beneficial properties observed in the remedies made from the flowering heather shoots include an astringent effect as well as an antiseptic action. This remedy is also a diuretic, a cholagogue, a depurative and a diaphoretic. Besides being a potent herbal expectorant, a vasoconstrictor, heather also has a mildly sedative effect on the body. The herbal infusion made from the flowering heather shoots is employed as a remedy for treating colds and coughs and is very effective in dealing with bladder and kidney disorders of all kinds. The harvest of the flowering stems is carried out in the fall and the gathered stems are dried outdoors for herbal use at a later time.

The heather is native to the temperate regions of the world, found naturally only in the temperate areas of the northern hemisphere. The habitats preferred by the heather include heathlands, moors, bogs, and open woodlands. Harvest of the herb is normally done late in the summer when the plant is in full bloom.

To grow optimally, the heather requires sites that have mildly acidic soils and good exposure to sunlight. The best growth is obtained when plants are grown at sites with good exposure to sunlight; however, the plant tolerates light shade quite well and succeeds even at sites with limited sunlight. The heather can only grow well in soils with pH below 6.5 and the plant will not germinate in alkaline soils. The heather grows best in poor peaty soils. Most heather plants are very tolerant of soils that are considered to be fairly dry; however, heather may not grow well under prolonged drought-like conditions. Heather can tolerate wet conditions during the winter and resists frosts and ice. The heather is a hardy plant, and plants tend to regenerate from the base following a fire – if the intensity of the heat was not too high. Where the fire was slow burning and intense than old plants may die out and new seedlings typically establish themselves at the site quite rapidly. The heather is a very common sight in ornamental gardens, and many named varieties of the species exist. Heather flowers are attractive to bees, butterflies, and moths, being rich in nectar content. Caterpillars of many species of the insect order Lepidoptera (moths and butterflies) also feed on this plant.

The heather is propagated using seeds. The seeds are sown as soon as they become ripe following the floral bloom. Seeds can also be sown in the month of February in a shaded part of a greenhouse to ensure germination. The usual practice is to sow seeds on the surface lightly covered with soil in the seedbed. The seeds are typically subjected to some cold stratification treatment for four to twenty weeks to ensure good germination rates. The normal germination time for the seeds is usually one to two months at a temperature of 20°C. Once the seedlings emerge and turn large enough to handle, each seedling is pricked out into individual pots and then grown in the greenhouse the first winter. The seedlings are only transplanted out at the permanent sites out of doors late in the spring or early summer of the following year – this transplant is carried out only after the last expected frosts of the new year have passed. The other method of propagation is through cuttings of the half-ripe wood, each cutting is about four to five cm long with a heel, and these are grown in July or August on a frame. If cuttings are taken from the mature wood from the growth in the current season, they are usually five to seven cm long and include a heel; these are grown in October or November on a frame. The layering of the new growth is carried out in the fall. The division of the plantlets is carried out during the spring season. All the growing plants need to be dug up; twelve months before division and these can then be replanted fifteen to thirty cm deep in the soil. This encourages the growth of roots along the stems and development is hastened as a result. Once the new growth occurs, and the time for taking divisions comes, it is sufficient to dig up the plants and cut off sections of the stem with attached roots. These cut saplings are best kept in pots in a cold frame or inside a greenhouse until they start to root well into the soil. Once good roots have developed, they can be planted out in the summer or the spring of the following year.

Heather contains flavonoids, arbutin, tannin, and an alkaloid, ericodin. This constituent has a strongly disinfectant effect within the bladder and urinary tubules.