Aluminum is a known neurotoxin, and according to Professor Christopher Exley of Keele University, aluminum-containing products are likely fueling the rise in Alzheimer’s disease.1 In an article published in the journal Frontiers in Neurology,2 he writes:

“We are all accumulating a known neurotoxin in our brain from our conception to our death. The presence of aluminium in the human brain should be a red flag alerting us all to the potential dangers of the aluminium age.

How do we know that Alzheimer’s disease is not the manifestation of chronic aluminium toxicity in humans?”

People with aluminum toxicity display many of the same symptoms as those with dementia, Parkinson’s, ADHD, autism, and other neurological diseases, and mounting evidence suggests aluminum may play a significant role in the development of those (and other) diseases.

By taking steps to protect yourself, you can minimize your exposure while maximizing your body’s ability to rid itself of this toxic metal, which will move you toward a long and healthy life well into your senior years.

Other toxins to beware of include fluoride and glyphosate. All of these are toxic in their own right, but research suggests they may be even more hazardous in combination.

You May Be Exposed to More Aluminum Than You Think

Aluminum can be found in a wide range of consumer products, including:

According to CDC,5 the average adult in the US consumes about seven to nine mg of aluminum per day in food, and a lesser amount from air and water.

Approximately one percent of the aluminum you ingest orally gets absorbed into your body—the rest is moved out by your digestive tract, providing it’s functioning well. The remaining aluminum can be deposited not only in brain tissue, but also in your nerves, bone, liver, heart, spleen, and muscle.

While one percent may sound like a tiny amount, your overall toxic load will depend on the total amount of toxins you’re exposed to over time. Your diet and digestive health will also play a role in how much your body is actually able to eliminate.

Occupational Exposure to Aluminum Raises Your Risk for Alzheimer’s

One recently published case study3 found high levels of aluminum in the brain of a man who was exposed to aluminum at work for eight years. He later died from Alzheimer’s disease.

According to the authors, it’s the first case showing a direct link between Alzheimer’s disease and elevated brain aluminum following occupational exposure.4

An earlier study5 suggested that aluminum from food and drinking water may be contributing to rising Alzheimer’s rates, noting that:

“In recent years, interest in the potential role of metals in the pathogenesis of Alzheimer’s disease (AD) has grown considerably.

In particular, aluminum (Al) neurotoxicity was suggested after its discovery in the senile plaques and neurofibrillary tangles that represent the principal neuropathological hallmarks of AD.

Al is omnipresent in everyday life and can enter the human body from several sources, most notably from drinking water and food consumption… [O]ther elements present in drinking water, such as fluoride, copper, zinc, or iron could also have an effect on cognitive impairment or modify any Al neurotoxicity.”

Indeed, dozens of studies have shown that fluoride causes brain damage and lowers IQ. Fluoride emitted by aluminum plants has also been implicated in animal disease.6

Farmers in Iceland, for example, claim their animals are being sickened by environmental fluoride contamination—some to the point of having to be euthanized. Others report higher rates of tooth damage and infertility among their livestock.

Another related study7 linked occupational exposure to aluminum to the development of pulmonary fibrosis, a condition in which scarring on your lungs make it difficult to breathe. In this case, the exposure occurred during sanding of Corian material.

Pesticides, for example, have also been shown to have an adverse effect on neurological function and brain health.8 In one study, farmers exposed to organochlorine insecticides had a 90 percent increased risk of depression compared to those who didn’t use them.

Exposure to fumigants increased risk of depression by 80 percent. People exposed to pesticides are also more likely to have Parkinson’s disease.

Clearly, when it comes to toxins, unless the chemical is acutely toxic, the real harm occurs when your body becomes chronically overloaded with them, and most people today are exposed to thousands and perhaps tens of thousands of different chemicals on a regular basis.

Farmers are not the only ones at risk for adverse effects from pesticide exposure. Glyphosate can be found in most processed foods in the Western diet courtesy of GE sugar beets, corn, and soy, and research shows glyphosate enhances the damaging effects of other chemical residues and toxins.

While nearly one billion pounds of glyphosate is doused on both conventional and GE crops worldwide each year, genetically engineered (GE) crops receive the heaviest amounts. Meats from animals raised in confined animal feeding operations (CAFOs) may also contain higher amounts of glyphosate residues, as GE soy is a staple of conventional livestock feed.

It’s quite crucial to understand that glyphosate contamination is systemic, meaning it is integrated into every cell of the plant, from root to tip. It’s not just an issue of topical contamination, as with many other agricultural chemicals sprayed on crops.

Normally, you need to thoroughly wash your produce to remove topical pesticide residues, but you simply cannot remove glyphosate from your produce. And neither can food and animal feed manufacturers who use GE ingredients in their products. This is part and parcel of what makes GE foods so harmful to your health.

Synergistic Poisoning from Aluminum and Glyphosate Implicated in Autism

Dr. Stephanie Seneff, a senior research scientist at Massachusetts Institute of Technology (MIT), has been instrumental in educating people about the hazards of glyphosate. In the video below, she explains how aluminum and glyphosate act together as synergistic poisons that promote autism. Based on the current trend, Dr. Seneff predicts that by 2025, half of all children born will be diagnosed with autism. Clearly, we must identify leading environmental factors contributing to this frightening trend. Lack of vitamin D caused by inadequate sun exposure is one factor. Nutritional deficiencies caused by poor diet are another.

Environmental toxins must not be overlooked however, and some toxins—glyphosate and aluminum included—are far more hazardous and ubiquitous than others, and are therefore likely to contribute to a greater degree. As Dr. Seneff explains, glyphosate’s mechanism of harm renders it particularly problematic. Indeed, according to Dr. Seneff, glyphosate is possibly “the most important factor in the development of multiple chronic diseases and conditions that have become prevalent in Westernized societies,” including but not limited to:

Tips for Avoiding These Pernicious Toxins

It seems quite clear that aluminum exposure plays a role in neurodegenerative diseases like Alzheimer’s. Other neurotoxins such as fluoride and glyphosate add to the toxic burden. The best way to protect yourself is to be careful about your choices in food and personal products, and minimize your use of vaccines and other drugs that are often contaminated with aluminum. Optimizing your dietary sulfur is also essential, as your body needs sulfur to manufacture its number one weapon against aluminum overload: glutathione.

By taking a few steps to protect yourself, you’ll minimize your exposure while maximizing your body’s ability to rid itself of this toxic metal, which will move you toward a long and healthy life well into your senior years. For additional tips and strategies that can help prevent and/or treat Alzheimer’s, please see my previous article “Two Exciting Alzheimer’s Advances: A Novel Early Detection Test Using Peanut Butter, and a Study Evaluating Coconut Oil.”

The following list offers a number of suggestions for items to avoid, to reduce your exposure to aluminum, fluoride, glyphosate, and other brain-harming components:

What You Need to Know About GMOs

Genetically modified organisms (GMOs), or genetically “engineered” (GE) foods, are live organisms whose genetic components have been artificially manipulated in a laboratory setting through creating unstable combinations of plant, animal, bacteria and even viral genes that do not occur in nature or through traditional crossbreeding methods.

GMO proponents claim that genetic engineering is “safe and beneficial,” and that it advances the agricultural industry. They also say that GMOs help ensure the global food supply and sustainability. But is there any truth to these claims? I believe not. For years, I’ve stated the belief that GMOs pose one of the greatest threats to life on the planet. Genetic engineering is NOT the safe and beneficial technology that it is touted to be.

The FDA cleared the way for GE (Genetically Engineered) Atlantic salmon to be farmed for human consumption. Thanks to added language in the federal spending bill, the product will require special labeling so at least consumers will have the ability to identify the GE salmon in stores. However, it’s imperative ALL GE foods be labeled, which is currently still being denied.

The FDA is threatening the existence of our food supply. We have to start taking action now. I urge you to share this article with friends and family. If we act together, we can make a difference and put an end to the absurdity.

When you see the QR code or so-called Smart Label on a food product, pass it by. Products bearing the Grocery Manufacturer’s Association’s (GMA) Smart Label mark are in all likelihood filled with pesticides and/or GMO ingredients.

The GMA’s 300-plus members include chemical technology companies, GE seed and food and beverage companies. Monsanto, Dow and Coca-Cola are just some of the heavy-hitters in this powerful industry group, which has showed no qualms about doing whatever it takes to protect the interest of its members.

Don’t waste your time searching through their website, which may or may not contain the information you’re looking for. If they insist on wasting your time and making your shopping difficult, why reward them with a purchase? A little known fact is that the GMA actually owns the “Smart Label” trademark that Congress has accepted as a so-called “compromise” to on-package GMO labeling, and that’s another reason why I believe the Smart Label mark is the mark of those with something to hide such as Monsanto. 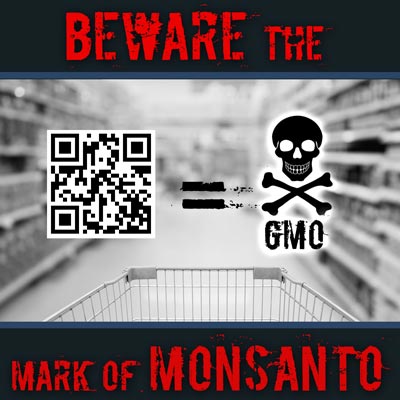 Will you financially support a corrupt, toxic and unsustainable food system, or a healthy, regenerative one? There are many options available besides big-brand processed foods that are part of the “GMA’s verified ring of deception.” You can:

Last but not least, encourage good companies to reject QR codes and to be transparent and clear with their labeling. This will eventually ensure that all GMO foods can easily be identified by the GMA’s “verified ring of deception” mark that is the Smart Label.

Campbell’s, Mars, Kellogg’s, ConAgra and General Mills all vowed to voluntarily comply with Vermont’s GMO labeling law by labeling all of their foods sold across the U.S. Will their plans change if the current “compromise” gets passed by the Senate? That remains to be seen, but if you like these companies, I would encourage you to reach out to them and ask them to remain steadfast in their promise.

If you are searching for non-GMO foods, here is a list of trusted sites you can visit.