Farm subsidies provided by the federal government are supposed to help agricultural producers manage the variations in agricultural production and profitability from year to year – due to variations in weather, market prices, and other factors – while ensuring a stable food supply. In reality, this support is highly skewed toward the five major “program” commodities of corn, soybeans, wheat, cotton, and rice. A handful of other commodities also qualify for government support, including peanuts, sorghum, and mohair, though subsidies for these products are far smaller. Dairy and sugar producers have separate price and market controls that are highly regulated and can be costly to the government.

Despite the rhetoric of “preserving the family farm,” the vast majority of farmers do not benefit from federal farm subsidy programs and most of the subsidies go to the largest and most financially secure farm operations. Small commodity farmers qualify for a mere pittance, while producers of meat, fuits, and vegetables are almost completely left out of the subsidy game (i.e. they can sign up for subsidized crop insurance and often receive federal disaster payments).

The 2014 farm bill limits the amount of payments a person who is “actively engaged” in farming to $125,000. A spouse is eligible for another $125,000 in payments. In reality, large and complex farm organizations have consistently found ways to avoid these limits.

The subsidized crops benefit from an increasingly complex layering of subsidy programs begun in the 1930s and altered haphazardly ever since. The primary subsidy system has included the following elements, each of which will be explained in more detail below.

The 1996 Freedom to Farm Act envisioned a move away from subsidized farming and into a free-market system. As a transition, the 1996 farm bill established a direct payment program to wean farmers off the government dole. Payments are based on a formula involving the historic production on a given plot of land in 1986. This set payment went to the current landowner or farm operator every year. The program has been maintained beyond its intended lifetime and became a federal entitlement program for farmers that cost the government about $5 billion per year. These payments were usually included in land value estimate, driving up land prices and rents and making it harder for small farmers to expand and new farmers to enter the business.

This program compensated farmers for drops in market prices. Congress sets price targets for each of the program commodity crops, and when prices drop below those targets, producers receive a government payment. The payment formula is similar to the formula used for direct payments and also is based on historic production. Because it is not tied to current production, these payments often make little sense. For instance, if a farmer’s land was producing cotton at the time when the base acreage was calculated, the current owner will get a cotton CCP regardless of what he is or is not growing currently. The program was the heart of the farm safety net, but offers perverse incentives that often reduce profitability and drive up taxpayer cost, even at times when farmers don’t need the help.

In the 2014 farm bill, Congress made things worse by replacing CCP payments with a new counter cyclical program called Price Loss Coverage (PLC). The new program sets price targets that a much higher than the CCP targets. These high price targets magnify all the problems CCP created.

PLC does not go into effect until 2015. We’ll be reporting on ARC payments in the next farm subsidy database update.

In order to moderate supply and price fluctuations, the government offers marketing loan assistance to give farmers the ability hold onto their crop and sell when it is most needed on the market. Without this assistance, cash-strapped farmers would all be pressed to sell their crops immediately after harvest, causing a temporary glut of product and very low prices on the market, followed by a swing in the opposite direction.

The current loan structure dates back to the 1986 farm bill. Congress sets the minimum loan rate (essentially the target price) for each program commodity crop. Farmers are able to take a marketing loan from the government, using their crop as collateral. After harvest, the farmer can market, or sell, his product whenever he chooses. If he sells at a high price, he can repay the loan with cash. If, however, the farmer repays the loan when market prices are below the mandated target price, he repays the loan at the value of the lower price, keeps the difference, and retains the crop to sell it later at a higher price. The difference between the loan price and the lower repayment price is called a marketing loan gain (MLG). Alternatively, producers can forgo the loan process and just accept a government payment for this price differential in the form of a loan deficiency payment (LDP).

Through these ways, a producer is able to guarantee a certain return for his crop, even in addition to the actual sale of the crop, and can game the system to make large profits at government expense.

This program created in the 2008 farm bill was designed to guarantee eligible producers a minimum total revenue. Thus, farmers would get a payment if they lost money under a low-price scenario or when the yield is low due to weather, pests, or other. Farmers who choose to enroll in ACRE forfeited their right to future CCPs and saw a reduction of 20 percent of their direct payments and 30 percent of their MLGs and LDPs. The program had only limited enrollment. ACRE was ended in the 2014 and replaced with the new Agriculture Risk Coverage (ARC) program.

The uncertainty of the weather is one of the great risks of farming and perhaps the greatest source of anxiety for farmers. Drought, frost, hurricanes, tornadoes – all can be devastating to a farmer’s crop and his income for the year. That is why the federal government subsidizes crop insurance. In addition, however, Congress has appropriated large sums of money on a nearly annual basis to compensate farmers who experience losses in a given year due to natural disasters. These payments are documented in our database and total $20.4 billion from 1995-2010, or more than $1 billion per year.

In an attempt to prevent this expensive ad hoc disaster assistance, the 2008 farm bill established the Agricultural Disaster Relief Trust Fund to administer payments through the Supplemental Revenue Assistance Payments (SURE) program. SURE is supposed to work with the existing crop insurance and commodity subsidy programs to ensure that a disaster does not cause a participating farm’s revenue to fall below a target level. Nonetheless, efforts currently are underway to issue additional, stand-alone disaster assistance payments, begging the question of what effect SURE has had, if any.

SURE was eliminated in the 2014 farm bill, but four other disaster programs, mostly for livestock producers and still in place.

The Federal Crop Insurance Program is administered by USDA’s Risk Management Agency (RMA). The program provides producers with two basic options. They can elect to secure an insurance policy that compensates them if they experience a loss in crop yields or if they experience a decline in revenue. RMA selects and pays private insurance companies to sell and service the policies. RMA determines the types of policies and the crops eligible for coverage that the private insurance companies can offer. Policies are available for more than 100 crops, but four crops-corn, cotton, soybeans, and wheat-account for more than two-thirds of all the acres enrolled in crop insurance programs according to the Congressional Research Service. 1

Taxpayers subsidize much of the cost of crop insurance in three ways. First, taxpayers pick up about 60 percent of the policy premium according to the Congressional Research Service. Farmers pay only 40 percent. Second, the federal government reimburses private crop insurance companies for their “administrative and operating” cost at between 22 and 24 percent of total premiums, again according the Congressional Research Service. Finally, taxpayers are liable for a significant share of the payments that go to producers in the event of a yield or revenue loss. As losses mount, the share of the losses paid by taxpayers increases.

Subsidies to reduce the cost of crop insurance premiums that producers pay have been the largest source of increases in cost to taxpayers. Premium subsidies have increased from $1.7 billion in 2001 to $5.2 billion in 2009. Premium subsidies more than doubled between 2006 and 2009, from $2.5 billion to $5.2 billion according to USDA Risk Management Agency. The cost of administrative and operation expense reimbursements increased from $648 million to $1.6 billion in 2009. Overall, taxpayers provide about 80 percent of the revenue to the private crop insurance companies that offer policies to producers according to Dr. Bruce Babcock, Director of the Center for Agricultural and Rural Development at Iowa State University. 3

The basic structure of crop insurance is the same, whether a producer chooses a yield-based or revenue-based policy. The producer chooses a certain level of insurance covering different levels of yield or revenue loss. The amount a producer pays in premiums increases with the level of coverage. The cost to taxpayers in premium subsidies and administrative and operation reimbursement also increases with the level of coverage chosen by a producer. For more detailed information of the variety of yield-based and revenue-based insurance options, see the USDA Risk Management Agency at http://www.rma.usda.gov/policies/

So-called “Actual Production History” (APH) crop insurance policies account for over 90 percent of the yield-based policies sold, according to the Congressional Research Service. APH policies insure producers against yield losses from “natural” causes such as drought, flood, frost, insects and disease. The amount of the payment a producer receives depends on the level of yield loss and price protection the producer has elected.

Revenue-based insurance policies operate in much the same way as yield-based policies except that producers insure a target level of revenue based on the market prices of the covered crop and the producer’s yield history. As with yield-based policies, the producer can select higher levels of revenue insurance. The percentage of the total premium paid by a producer increases as the amount of revenue covered by insurance increases. The cost total cost of premiums goes up as coverage goes up, which means the cost to taxpayers also goes up with higher levels of production even as the share of the premium covered by taxpayers goes down. The producer receives a payment when his or her actual revenue falls below the insured target level of revenue if the producers experience a loss of yield, a decline in prices, or some combination of both.

Revenue-based insurance policies were first introduced as a pilot program in 1997. By 2003, revenue-based policies covered more acres than those covered by APH policies, according to the Congressional Research Service.

Crop insurance policy payouts are highly concentrated geographically. Because only four crops-corn, cotton, soybeans, and wheat-account for over two-thirds of the acres insured, crop insurance payouts tend to go to counties that produce a lot of those four crops.

Historically, crop insurance payouts, based on yield loss, have gone to counties vulnerable to extreme weather. With the introduction of revenue-based policy, payouts have also been concentrated on counties that have experienced swings in commodity prices, or some combination of yield losses and price declines. 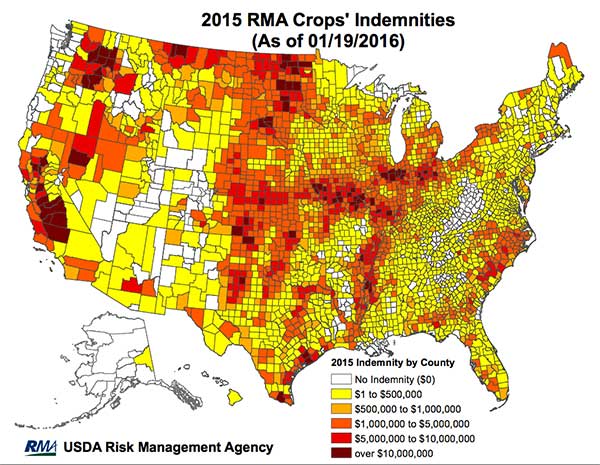